I've decided to put to blog some of my food experiences, A slight departure from photography but hey, we all need to eat.

Being freelance, it's become a bit of a mission for me to find places that offer good value, tasty and fresh food when I need a quick, tasty fix. It's all too easy to slip back into the junk-fest of the fast food chains when things are busy.

With great excitement a new deli opened the other week. Today I decided that I'd reward myself with a spot of lunch after hitting a tight deadline, so I popped over to 'The Deli House' in Borehamwood for some food.

There's a swathe of new eateries opening up on my local high-street. It's a pretty busy place, and it's great to see the old closed-down shops given a new lease of life and opening up as potentially exciting places to eat.

The Deli House actually opened a couple of weeks ago, but was so popular they ran out of food, then closed for a few days whilst they re-evaluated. It was encouraging that there was a heavy demand, but slightly worrying that they couldn't cope with actually having customers. Still, teething problems are part of the learning process and once they had announced they'd sorted them out I was rather excited about a salt beef sandwich.

I arrived and the sun was shining, the place was packed, always a good sign. The decor is very light and fresh, lots of room to sit inside and a couple of tables on the outside. The whole front was opened up to the outside. The menu boards clear and not too overloaded with information. I liked it.

So I stood there for around 10 mins, keeping an eye out for a table. I wasn't sure whether I was meant to order then sit down, or sit down and wait. I kind of hung around a bit then went to place my order. I was told to sit down and the staff would serve me.

The menu is good. New York style, kosher deli style. Decent choice of hot and cold sandwiches, schnitzel and loads of delicious things. The classic Salt Beef, Reuben and all the trimmings, and sides of felafel and chopped herring. There's enough choice to keep you coming back for several visits. Excitedly I sat down, and spotted they'd put the Wifi code on the menu holder on the table. A nice touch, but I didn't see the network so I assume they've not set it up yet.

The condiments on the table were fairly standard. Some random ketchup (not Heinz) but Heinz mayo. Some tables had salad oil too. Cutlery was sparse but in a tin on the table. Each set wrapped in a paper napkin.

I didn't have to wait too long, but the sandwich looked a little disappointing. A little limp and forlorn. On the plate were a couple of tomato and cucumber slices and a little pile of iceberg lettuce. Mustard in a pot on the side. I'd not say the salt beef was piled high, but it wasn't one slice. Somewhere in between, so not great but not terrible. possibly about 3cm thick in the centre. No pickles or other garnish though.

My latke was on the way (I was told) When it did arrive I was disappointed. They had run out of the large ones so suppled 4 small balls. They were not even luke-warm. I'd say room temperature at best.

The sandwich was dry. The meat was most definitely not hot. The 'hot sandwich' was tepid. Both in looks and temperature. The meat was 'ok', slightly dry but not the absolute worst I've had. Not a patch on the bagel places in Brick Lane though, where they hand carve thick slices and pile it high. Salt beed should be buttery smooth, break into juicy little glistening pieces and taste fresh and mellow. This wasn't. It felt like it had been delivered in shrink wrap,  pre-cooked and sliced. I don't think it's hand carved on the premises. I thought that over 50p for each little latke ball thing was overpriced too.

All the time, playing on my mind is the fact that for another pound or so you can get a Salt Beef sandwich from the famous Brass Rail Salt Beef bar in Selfridges, The Deli House prices don't seem to compare for value, especially being in Borehamwood rather than Oxford St, and not, err, Selfridges.

I would have addressed the issues with the staff, but they were totally inattentive. No one came to check up. I was waiting to see if they did. They were all huddled around the till (the same way they were when I arrived) trying to figure out how it worked. I'd have forgiven them for the learning curve, but they'd already opened and closed so I was rather hoping they'd be slick and ready to welcome customers.

So that was that. I wasn't sure again if I needed to stand up, and go and pay, ask for the bill then take it to the till or sit and pay at the table. No one seemed to know. I went to the counter and waited another 5 or so minutes watching the staff figure out the till.

Another problem is that the till is sandwiched (pun intended) between the high glass chiller cabinets with the cakes etc in, so you can't actually make any eye contact with the staff behind the counter. There were people paying for take-aways, people waiting to pay who had been sitting down to eat and just no form or organisation at all. I had to wave at the staff through the glass to get their attention and then mime to them what I wanted.

The bill was just shy of £10 which for a lunch and a can of drink isn't a bad price, but I had a feeling of disappointment.

The photo on their Facebook page really is not representative of the food they serve. If they'd served me this, it would be a different story. 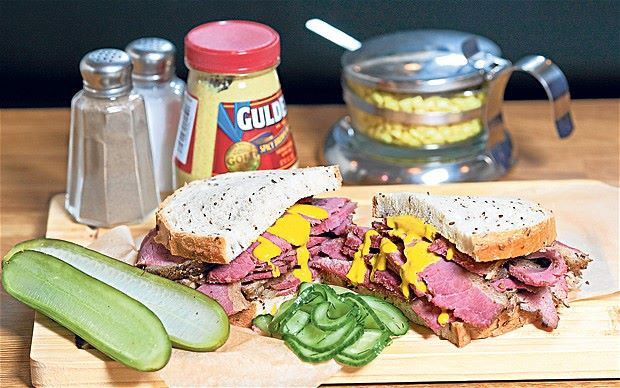 The place is nice, but the food is disappointing. Perhaps my expectations were too high- but there's little excuse for not heating the food properly. A couple wanted to order a pudding. They'd sold out. It was still lunch time.

I really hope they iron out their issues. People won't give them a third or fourth chance. They opened, failed, closed and re-opened. People will not bother if they can't offer a decent level of good food and good service. On chatting to a couple of friends who've been, they also remarked their soup was cold, the food not hot.

As I was walking to the car, I actually felt peckish. I don't usually eat massive lunches, but I was feeling totally unsatiated. I went home still hungry.

There's another Deli type place opening very soon just a little further up the road. The Deli House should really use this time to capture a loyal audience or they could suffer. The other place is a chain too. I want to support my local business but I can't if they don't improve. I really hope they can pull it out of the bag and make this place something great.

I don't know if I should give them '3 strikes and out' or abandon the place already.

Nicholas(non-registered)
I must agree with your comments. The idea of a good local salt beef deli is great.However the take we had , not good . The sandwiches where only very fair salt beef was like warm at best and the onion rings where cold , the chips where also cold. May try it once more but that will be the last time. It's a shame because the idea is great and the area will certainly take a good salt beef deli
Debbie(non-registered)
I have to agree - I was very excited that at long last a salt beef bar was opening and with thoughts of a rival to Edgware's B&K, i looked forward to a meal there this week. To say it was entirely adequate is unfortunately a pretty accurate description and I for one will not be rushing back but instead will patiently await the opening of the Delisserie. So my main observations were - the counter height means you have no opportunity to try to catch the eye of the staff who also do their best to totally avoid any interaction with seated guests. The staff themselves are poorly trained and have no engagement skills leading to a lack of a friendly and welcoming atmosphere. We were seated at a table that was so small it didn't actually fit the 2 dinner plates, side plates, glasses and condiments. The salt beef was dry and luke warm and portion sizes whilst adequate were not what one would call generous. We had to ask for mustard - surely a traditional condiment for salt beef. Its such a shame as i had been so looking forward to being a regular customer but the Deli House seems to make every effort to be just barely acceptable rather than striving to be exceptional
SATUREYES PHOTOGRAPHY
It's about supply and demand. There's plenty of opportunities for new business and competition is healthy both for consumer and the businesses involved. It keeps us all on our feet.
I wish all new business the best of luck, but ultimately the consumer will decide who wins out, and each place needs to ensure they are constantly offering value, quality and service.
Luisa Gottardo(non-registered)
The new place coming, Delisserie, only has three other locations, and is absolutely delicious. Not your typical 'chains like pizza express, still a small venture which I would 100% recommend to anyone and everyone!
Dan(non-registered)
If the delisserie opens and is as good as their other branches, this business could suffer, I hope they don't as would rather have a used shop rather than a vacant shop, but have to agree the high street is getting better month by month
No comments posted.
Loading...
Subscribe
RSS
Recent Posts
Foam Talent Satureyes Launch 'Living Photos' Twitter tonight? You must be mad. RAW Photo import and editing on the iPad - it CAN be done! Satureyes and The IPO iPad Pro and RAW files Gear: Leica D-lux (Typ 109) six months on Food Review: The Deli House Borehamwood What the iPad Pro and Apple Pencil could mean for photographers. Do we really think about what our profile photo says about us?
Keywords
Latest News Satureyes rick bronks Pictures london photos photography Rants & Moans Hints & Tips leica
Archive
January February March April May June July August September October November December
© SATUREYES PHOTOGRAPHY
User Agreement
Cancel
Continue